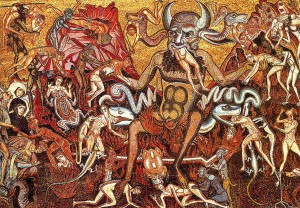 About a month ago, just before Easter, Bergoglio gave an interview to Eugenio Scalfari, the 93-year-old journalist, an atheist, and friend of Bergoglio. He granted an interview to Scalfari back in 2015, in which he denied the existence of hell, saying that really evil people do not go to hell after death, but are merely annihilated, that is, cease to exist.

Scalfari reported that this same comment was made by Bergoglio in the 2018 interview. The Vatican the next day issued a qualiﬁcation, saying that what Scalfari reported was not the exact words of the “pontiff.” The ever wishful thinking Novus Ordo conservatives seized upon this as a “denial.”

Now imagine that a wife hears that her husband said, “My wife is a witch!” She confronts him about this comment. He responds, “Well, those were not my exact words.” He would end up with a frying pan on his head. Why? Because that is not a denial.

So in the case of Bergoglio, the only true denial that he could have made is to say that the statement was a complete fabrication, and that he never said anything of a kind, and never would say such a thing. He would have to add that Scalfari was either a liar or demented.

Anyone who is familiar with even their First Communion catechism, meant for seven-year-olds, knows that the existence of hell is a matter of Catholic Faith, and that to deny it is heresy.

It is therefore clear that Bergoglio is a public heretic and it is morally certain (certain in the practical order) that he is obstinate and pertinacious in this heresy, since he has no excuse of ignorance. It would be positively absurd to say that the man is ignorant of the doctrine of hell. Consequently, anyone who does not perceive this man as a public heretic is either demented, intellectually dishonest, or living in an imaginary world.

St. Alphonsus said: “If there is no hell, then there is no heaven.” Why is this so? Because both are grounded on the justice of God. As God rewards the merits of the just, so he punishes the demerits or sins of the unjust. Furthermore, hell is eternal, since the sinner, if he were one day released from hell, would have the ﬁnal victory over God.

Bergoglio also denied the immortality of the soul, another dogma of the Catholic Faith. For he says that those who are evil are annihilated after death. This is yet another heresy to add to Bergoglio’s pile.