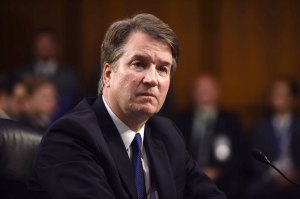 The recent weeks have been dominated ad nauseam by the accusations against Judge Kavanaugh. Here I will give my reflections on this case and provide some moral principles.

In the first place, I have no knowledge of the judge’s political views, and am quite indifferent regarding his approval. Although he comes highly recommended in conservative circles, the fact that liberal neocon George W. Bush supports his nomination is disquieting. On the other hand, the hatred that the Leftists have for him is reassuring.

What is of particular concern is the manner in which he is being accused.

In the first place, I found Dr. Ford’s testimony against him to be very unreliable and inconsistent. The prosecutor who interrogated her published these inconsistencies in a report to the Senate.

Secondly, I find it hard to believe that she would have said nothing about the incident to anyone for thirty-six years.

Be these things as they may, what should we think about Judge Kavanaugh?

In this case, however, it is Judge Kavanaugh’s word against Dr. Ford’s word. Moral law requires us, in that parity of contradictory testimony, to take the word of the superior, which in this case would be that of Judge Kavanaugh.

Furthermore, the testimony of Dr. Ford is weakened severely by the fact that she was not cross-examined. The purpose of cross-examination is precisely to test the truthfulness of the witness. Cross-examination by a good lawyer would have demonstrated the many contradictions in Dr. Ford’s testimony, as reported by the prosecutor who questioned her.

As well, it is a general principle in both civil law and moral law that the accused has the right to face his accuser. This right was denied to Judge Kavanaugh.

The fact that the Leftist senators kept the information secret until the last minute also seriously taints the integrity and honesty of the senators who oppose Judge Kavanaugh. For if they had really believed the information to be true, it is of such a nature that it should have been brought forth immediately.

I therefore conclude that Dr. Ford’s testimony should be discounted for all of the reasons I have stated above.

Even if, however, one should accept Dr. Ford’s testimony as true, I do not believe that the qualifications of any human being should include actions which he or she performed when seventeen years old. Teenagers do many imprudent, foolish, stupid, and sinful things, but in many or even most cases they recover from these bad actions or habits and act like responsible adults. Furthermore, what the judge is accused of is not even a complete act. It was not a rape. Even as it is reported, the prosecutor said that it is not actionable even from the point of view of prosecution as a crime. Furthermore, Judge Kavanaugh is supposed to have performed this act while drunk, according to his accuser, which would reduce culpability, if the incident did indeed occur.

If Judge Kavanaugh had done something like this in more mature years, then I would say that there would be reason to block his nomination.

I would like to find out from both the accuser and from the senators some of their activities during their teenage years.

What is most lamentable about the whole matter is the absolutely deplorable manner in which these hearings took place, with no regard for the most fundamental rules of evidence, or even of human decency.

7 thoughts on “Judging the Judge”